skip to main | skip to sidebar

The 'quality' of our politicians

It's been a while since I posted anything - mainly I guess because most of my posts seem to be about politics and, like so many others, I'm so disgusted with the current crop that I just about gave up.

But instead of sitting here seething about the utter incompetence, greed, corruption and total disregard for the country and its population I really should let off steam on here.

Here's an example of what we're up against, from today's Guardian:

The new minister for defence industry, Linda Reynolds, has disavowed and then embraced arguments from her cabinet colleague Mathias Cormann that wages adjusting in line with economic conditions is a “deliberate design feature” of the Australian economy.
During an untidy television appearance on Sunday morning, the newly minted cabinet appointee was asked whether she agreed with the sentiment that flexibility in wages, and keeping wages at a relatively modest level, is a deliberate feature of Australia’s economic architecture to help drive employment growth – a point the finance minister made last week.
Believing the observation was an argument being put by Bill Shorten in his economic messaging, Reynolds initially flatly rejected it, and blasted the Labor leader for making it.
“No I don’t believe that – absolutely not – and for Bill Shorten to even suggest that, I think, shows a fundamental lack of understanding about economics,” Reynolds said.
When it was pointed out to her that the argument was actually Cormann’s, not Shorten’s, she promptly declared her colleague was “absolutely right”.

Ignorance and stupidity? You bet.
Posted by Seabee at 4:47 pm No comments:

It's all about me

The Liberal Party are still claiming to be 'the natural party of government'.

In reality they're not even one party, they're two - conservative and far right - which are constantly at war with each other.

And they don't fight elections on their own anyway, they do it in coalition with the National party.

The only reason the Libs need the Nats is they can't win an election on their own, so it's about self interest.

The only reason the Nats are in the coalition is they can't win an election on their own, so it's self interest.

The only reason the far right doesn't break away and form their own party is that they can't win an election on their own, so it's self interest.

Are you seeing a pattern here? Like self interest.

This culture of self interest can be traced back to John Winston Howard, like so many other things that have caused the country to go downhill.

He took what was a sensible centre-right party to the far right, even adopting some of Pauline Hanson's policies on the way.

Far right dinosaurs such as Tony Abbott were promoted by Howard which gave them a foothold and the opportunity to push for control of the party.

Howard ignored the interests of the country, being interested only in keeping himself in power. He frittered away the wealth that came in, not from his policies but, from China's economic expansion.

That culture has continued with no thought being given to the country, or indeed the planet. It's only about them, about keeping power and about keeping their donors onside.

An utter rabble with no policies, spending their time blaming Labor for everything even though they've been in government for five years and fighting amongst themselves.

Our politics go from bad to worse.

A large part of the problem is Tony Abbott and his extreme right-wing supporters, who hold enough power to depose the Prime Minister and use it to push him either further right or into a do-nothing mode.

Abbott, the Mad Monk as he's known, has always been a problem.

Trainee priest, then into student politics and that's all he's done ever since. Reports of his aggression to female student rivals abound, then he was John Howard's attack dog. Went on to be the most negative leader of the Opposition we've ever had, then the worst Prime Minister. Thankfully he only lasted a short while before being ousted by his own party.

He actually didn't win the election, Labor lost it because of their stupidity during the Rudd/Gillard musical chairs period. Abbott was the most unpopular leader ever to win an election according to the polls.

In government he had no idea. It was all the same negativity as his opposition years, dismantling Labor initiatives, ruining the NBN (a Labor initiative). There were no positive ideas, no policies, just wrecking.

As a former PM he gets far more media attention for his mad ideas than he should - other than the ridicule they deserve. He swans around the world at our expense, embarrassing us time and time again.

The latest is his speech in London. He seems to have moved slightly from his 'climate change is crap' position to now say that if it happens "it might even be beneficial". His logic? "In most countries, far more people die in cold snaps than in heatwaves"

In response, British MP Ed Miliband tweeted:  "I know Donald Trump has lowered the bar for idiocy but..."

His far right mob have also pushed the government into being ready to scrap Australia's clean energy target. We're going to keep on mining coal, fracking, subsidising the crooked Indian company Adani to create the country's biggest coal mine that will destroy Queensland's Galilee Basin and severely damage the Great Barrier Reef. And continue to subsidise big miners but to cut back support for renewables.

It was also Abbott & Co who forced their anti marriage equality agenda on us. Under PM Turnbull the marriage Act was to be changed to allow same sex couples to marry. It had been changed in 2004 by John Howard to specify that marriage could only be legal between a man and a woman. It had never specified gender before that.

Anyway, the far right influenced their party to include a referendum or plebiscite in their election promises, which was simply a delaying tactic to stop legislation going through. In the end we got a hugely wasteful postal survey, non-binding on MPs. Several said they would vote 'no' regardless of the result.

The cost is $122 million and as predicted it's produced a vicious debate, encouraging the nutters to come out from under their rocks.

When Malcolm Turnbull became Prime Minister there was huge support, after the dark Abbott reign,
for a man who had always been pro-marriage equality, pro renewable energy, accepted that climate change was real, was pro a republic.  But on the threat of losing his job to the right wing he's backtracked on everything he stood for, being a huge disappointment.

It's all about the extremists pushing their agenda, the centre not willing to stand up to them and the country going backwards while they fight childishly with each other.

Posted by Seabee at 3:23 pm No comments:

It's not the gun culture...

Yet another mass shooting in the US and the media is full of hand wringing over the country's  'gun culture'.

They all miss the point, the underlying problem. It's the violence culture that's the root cause, the gun culture is simply one manifestation of that.

America is and always has been a violent society. From the earliest days of violent colonisation, the Indian Wars, virtual extinction of the buffalo herds, the Wild West, the gangsters with their machine guns. The huge violent street gangs, police routinely attending scenes with weapons drawn. The idolisation of the military, the automatic 'nuke 'em' reaction to adversaries. The violence coming non-stop out of Hollywood.

It's gone on for so long, is so ingrained into the culture, that I don't think there's an answer to it.

Posted by Seabee at 2:41 pm No comments:

I think it's the name that's put a jinx on it, the 79 storey tower in Dubai Marina that went up in flames this morning for the second time in two years.
It's called The Torch. 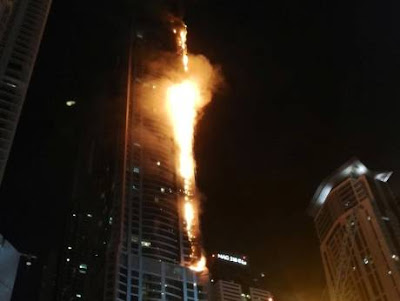 Thankfully, on both occasions, everyone evacuated safely.
Posted by Seabee at 2:12 pm No comments:

We've had a few cooler days so far this winter, but most have been sunny, perfect blue sky and no rain for weeks.

Today set a new record for July with 26.5C in Sydney, which is amazing warmth for the depths of winter!

It didn't quite reach that here on the NSW Central Coast but it sure didn't seem like winter! 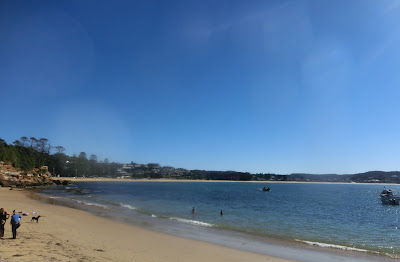 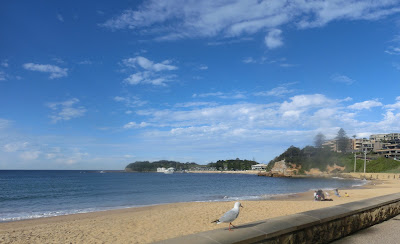 It'll cool down next week, the met bureau says, and we may even have some rain on the way. The garden needs it.
Posted by Seabee at 5:40 pm No comments: 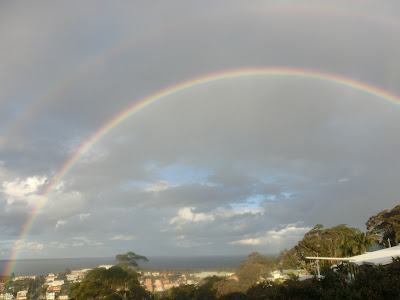 Clear sky to the west as the sun sets, clouds to the east but no rain that I can see, but a perfect rainbow has just appeared.
Posted by Seabee at 4:41 pm No comments:

Seabee
I've lived and worked in Sydney, London, Singapore and Dubai, originally in ad agencies & PR companies and later in marketing. I'm interested in what goes on around me, whether it's big news or trivia, and I usually have an opinion about it. I'm back in Australia after a second spell of seven years in Dubai.